My work is to go on show at, a major exhibition at the Fitzwilliam Museum, Cambridge. Opening on 11th October, this new exhibition is the first of its kind to examine the interplay between money, power and dissent over the last 200 years – with a key strand of the show exploring the role of the individual in protesting for rights and representation.

Contemporary artworks by kennardphillipps, Banksy and JSG Boggs are contextualised against earlier works and reveal continuities in the targets of protest across time. More than a hundred visually striking objects, most of which have never been seen before, are juxtaposed with important loans from museums and private collections.

My sculpture “Instruments of State – China”, is to go on show as part of the exhibition and was acquired by the Fitzwilliam Museum especially for this show and to join its permanent collection. “instruments of State- China” is one of a series of weapon sculptures I have made from currency. It is part of a wider body of work including collages and print exploring ideas around money as a conduit of power and the wielding of power by an individual or state, corruption and conflict. 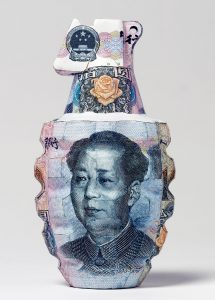