The Royal Mint has an awe inspiring over 1100 year history, and I was approached by them to create a one- off “Masterwork” and a limited edition print.   I had pre – pandemic been able to visit the Royal Mint Museum and spent a lot of time doing additional research – reading about the Queen and also taking an extensive look at online images of coins and medals.

The history of, and images on the coins and medals at the Mint is a very rich source to draw upon for inspiration. I looked at some early Elizabethan gold coins, called Angels. I liked the free, hand – drawn quality about them, and that they were slim, like a wafer. I was also looking very closely at coins and medals struck of Queen Victoria, in addition to those of Elizabeth II.  The coins of these three female monarchs, each with exceptionally long and successful reigns began to coalesce. To me the imagery on the coins is at once a statement of Nationhood and power, yet also very beautiful and quite often very feminine and almost romantic.

As I make a lot of collages, I began to think about the idea of deconstructing the images on a coin and from that create a new work that would include an image of the Queen.

After looking at several different portraits I made a drawing of the Queen as she appears on the 1952 Coronation Medal. I find it an almost poignant image, a semi idealised portrait of a beautiful young woman, with a huge crown. The weight of State and her future upon her. I then made further drawings of different elements from other coins that had classic national symbolism, such as the Tudor rose, shamrock and thistle, alongside looking at lettering and heraldic symbols such as the lion. As we almost always see the Queen in only a formal role, I then wanted to find a counterpoint to that with something more simplistic, human and humble. As part of my working practice, I collect and press a lot of plants. I like the idea of them being preserved at a particular moment in time, and how they are changed by that process as they get pressed into a different shape and dimension. I decided to include some wild native flowers, so added in the daffodils, to represent Wales, alongside the primroses, celandines, daisy and wild roses. The wild rose has a fallen petal to mark the passing of time.

These drawings were then used to make the print edition and were then re done a second time and cut out in gold leaf on paper to make the collage version. The using of gold for me has a similar resonance to my use of banknotes in my work– it is a symbol of power, a store of wealth, a means of exchange and all those sorts of things, as well as being opulently beautiful, the ultimate embellishment and in art history a traditional medium for Icon paintings, which in a way these works could be said to be. “Icon” is a term often over used, but in the case of Her Majesty, I think it is true to say she is one, so it is a real honour to be asked to create these works for her 95th Birthday.

The print edition was done as a 2 colour blockfoil. Although the image is almost the same, I wanted it to look different to the collage and really liked the patination and reflective qualities of the coins. I knew I could achieve a metallic effect but I also wanted to try and get some form of relief and texture in the surface of the print.

The 95th Birthday of Her Majesty The Queen Masterworks “Sovereign Queen” 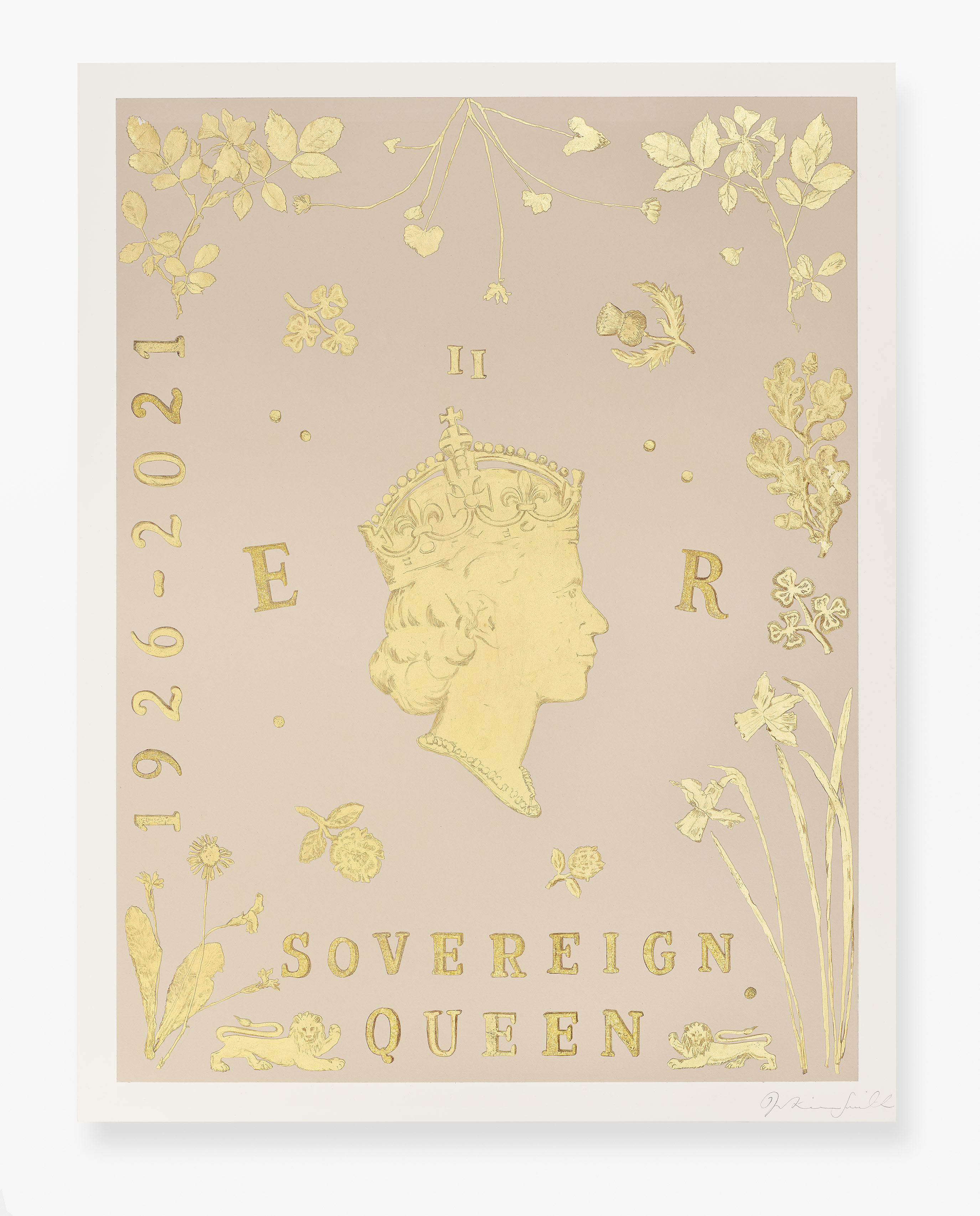 The 95th Birthday of Her Majesty the Queen Masterworks ‘Sovereign Queen’ 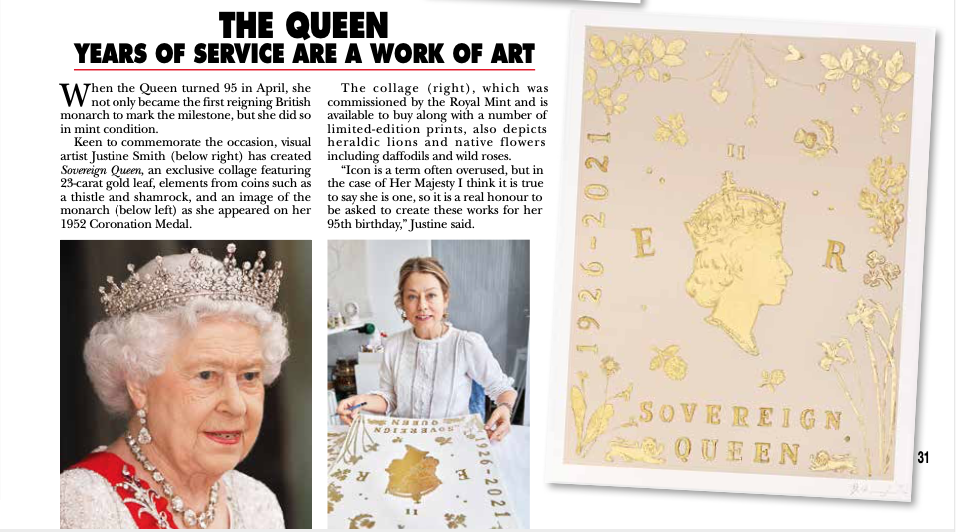 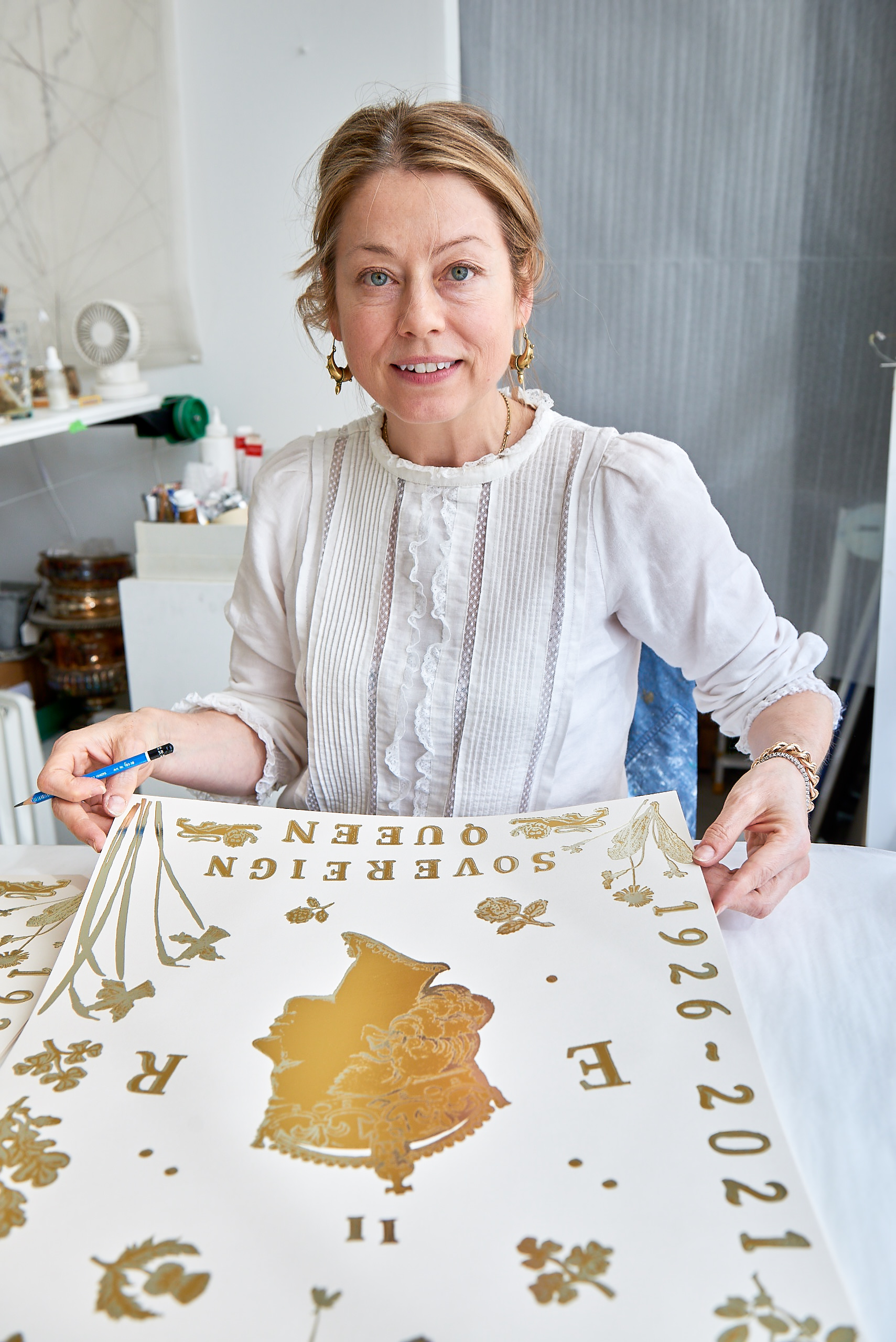 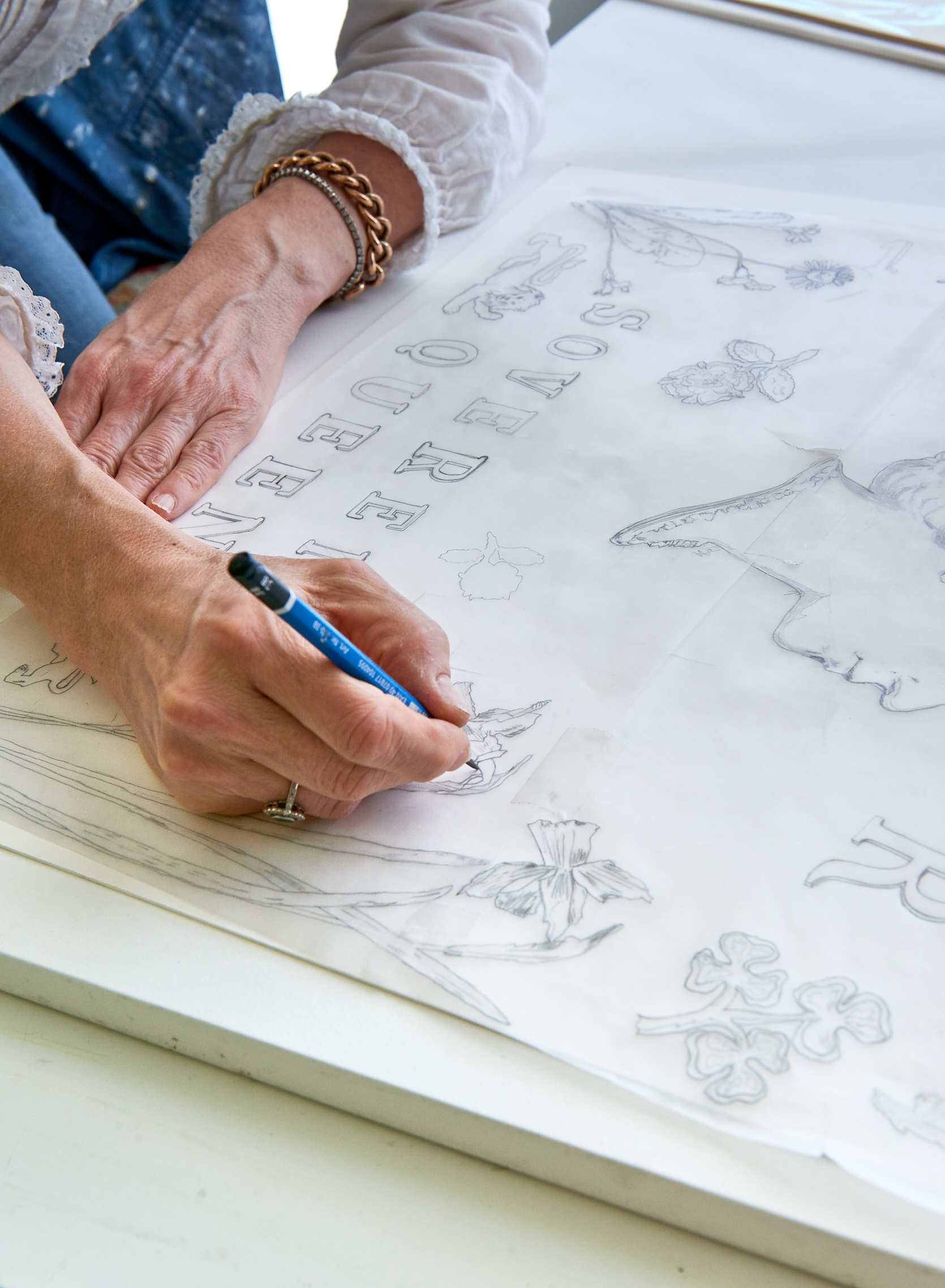 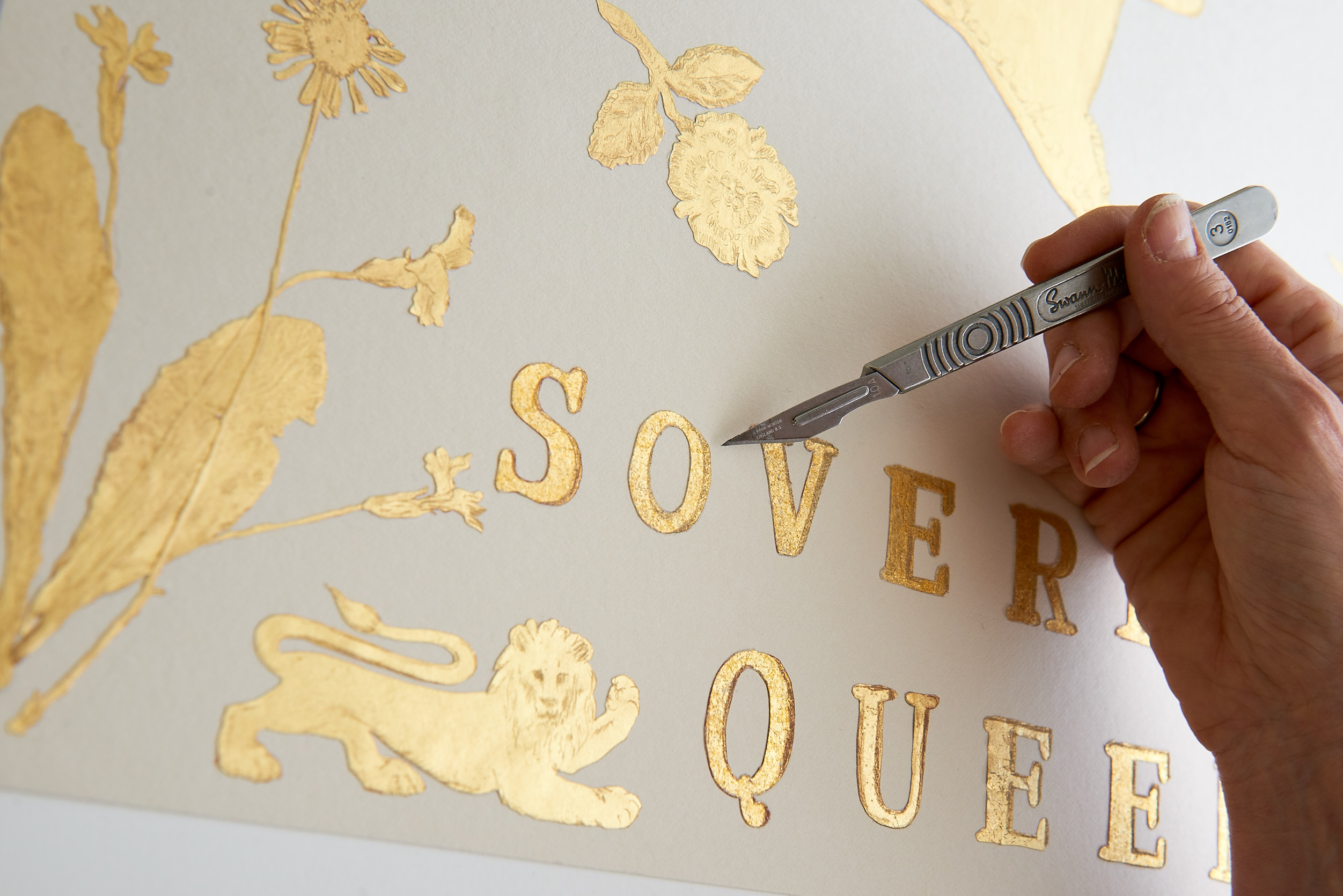 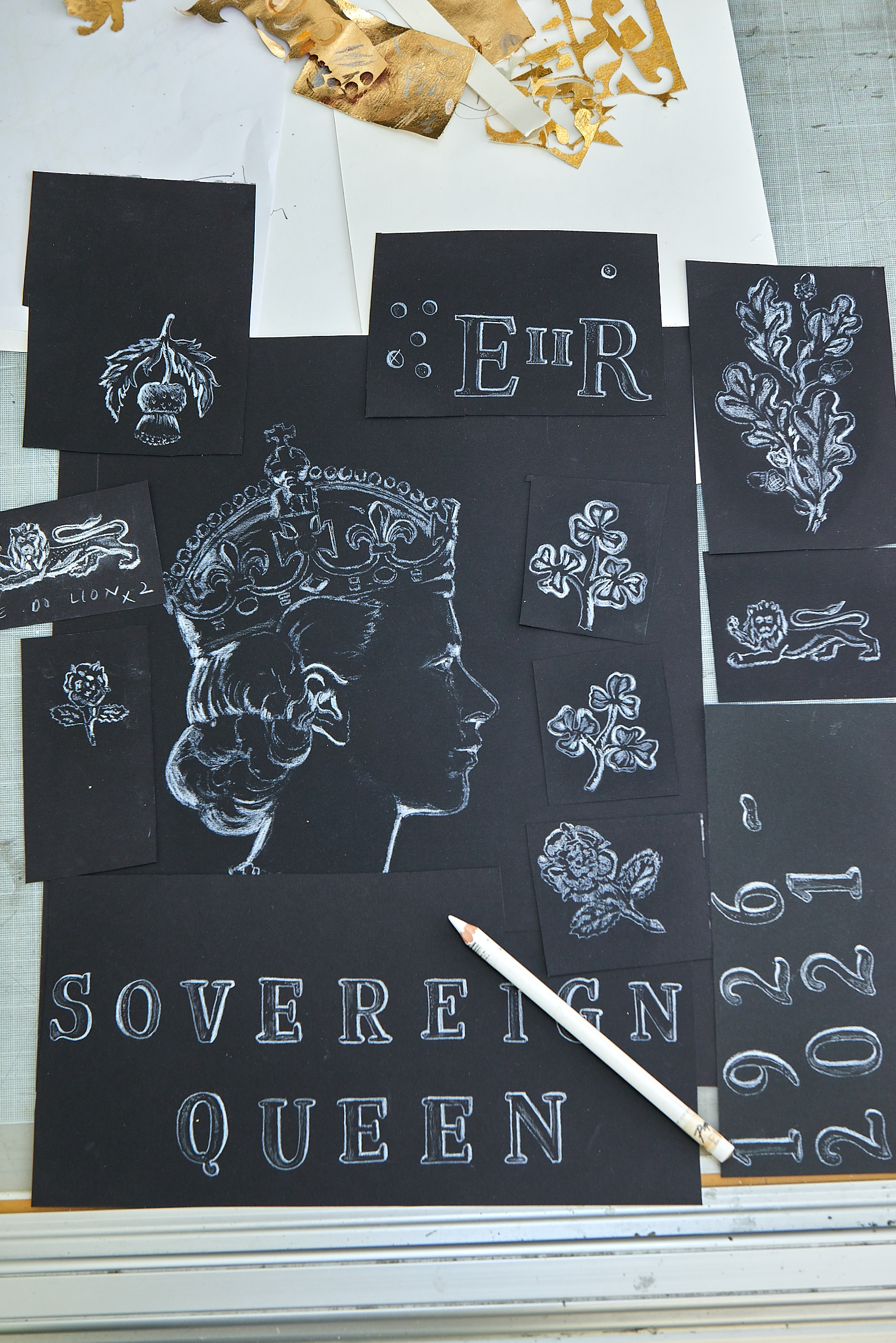 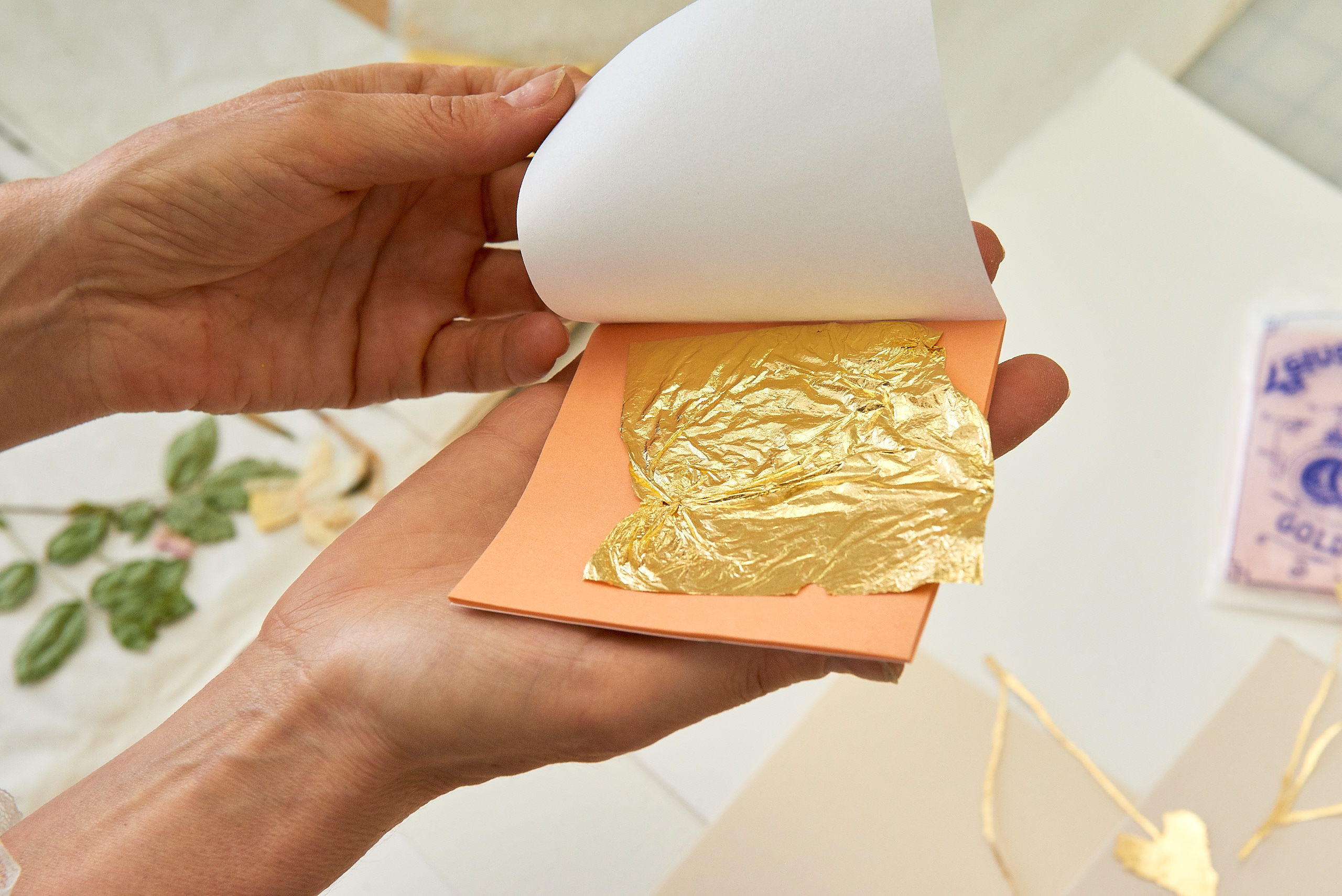 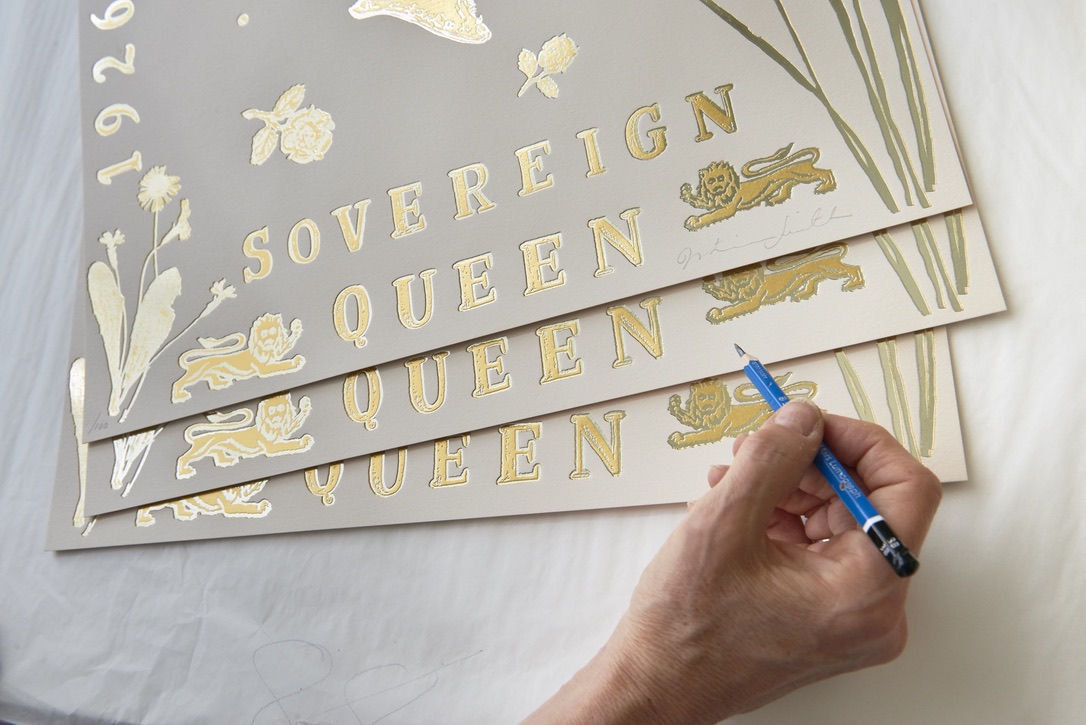 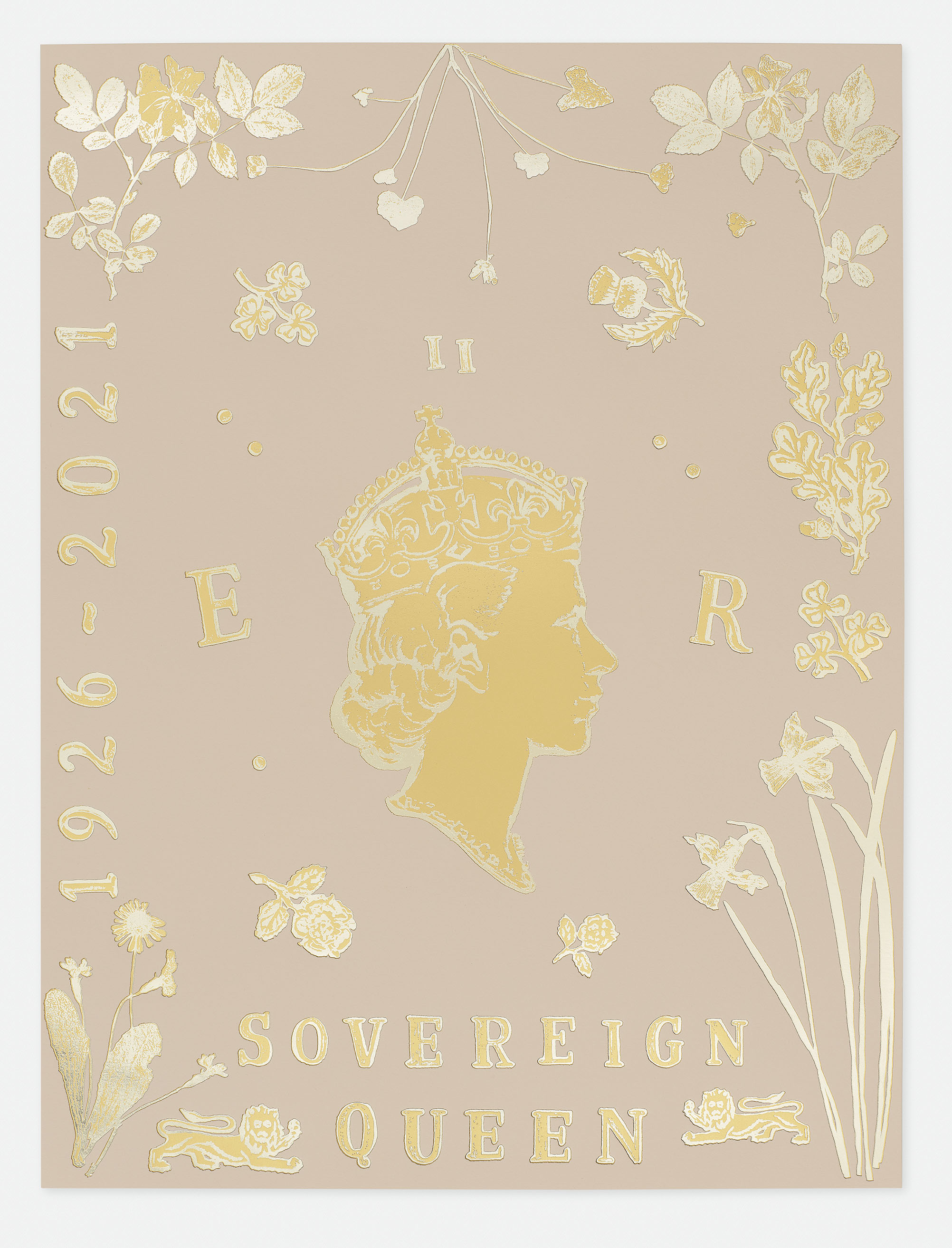